History and Culture CULTURE OF AZERBAIJAN
Azerbaijan culture is tightly bound with the history, religious beliefs, national traditions and values of the country. Its history goes back to primitive times, passes through pagan temples, monumental architectural constructions of the early Medieval Ages, relates to the Islamic culture, reflects the influence of Russian traditions and brings this legacy to the modern world.

Quite obviously, the style of life, aesthetic tastes, the national image and qualities, are strongly reflected in folk arts. One can easily come across numerous wonderful models of Azerbaijani folk arts in the world's largest museums. The pieces of arts created by the skillful hands of Tabriz, Nakhichevan, Gandja, Gazakh, Guba, Naku, Shaki, Shamakhi and Nagorny Kharabakh can be found in large museum collections of Victoria and Albert of London, Louvers of Paris, Metropoliten of Vashington and Vienna, Rome, Berlin, Istanbul, Tehran, Cairo museums.

The history of folk arts in Azerbaijan has a long and interesting history. Works of art made from metal extracted from Nakhichevan, Migachevir, Gadanay, Gandja and other places are approximately 5000 years old. Crockery, weapons and adornments found here are not historical facts alone, but valuable sources which testify the skills of the master.

There are those with portrayals, showing traditions, religious ideas and even garments of people of that epoch among art patterns made from metal. History, of ethnographical and artistic features of folk art are reflected on the garments. These features are reflected both on garments of certain form and its adornments and fine needle-work, knitting.

Bronze needles and awls from the beginning of the bronze epoch (III millennium B.C ) were found during archeological excavations in Azerbaijan as well. These findings prove that the ancient population of Azerbaijan could sue clothes for themselves. Little clay statues founded from Kultapa and Mingachevir (III millennium B.C) and seals of the V century B.C found in Mingachevir provided opportunities to have a certain idea of garments of that time. Clothing remnants sued from different silk materials are found in Mingachevir catacombs of V-VI centuries B.C. Number of adornments ( III-IV century B.C), made of gold, and clay crock of foot-gear form are well-grounded evidences, proving old high material culture of Azerbaijanis.

Azerbaijan was rich of architectural pieces one of branches of folk art along with works of fine art since ancient times. Maiden tower and Shirvanshahs palace in Baku, Momina Xatun and Yusif ibn Kuseyr mausoleums, created by architect Acami in Nakhichevan, Natavan's home, pictures on walls of Shaki khan palace and other patterns are rare pearls of architecture.

Azerbaijan music, enriching world musical culture with its rare pearls, has multi-centuries old traditions. Creators of folk music, handed over these traditions to generations, have great role in development of Azerbaijan music.

Mugams are foundation of Azerbaijan national music. It is not accidental that UNESCO, specialized organization of UN, entered Azerbaijan mugam into the list of world cultural heritage. 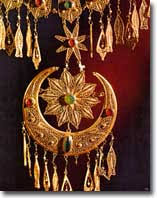 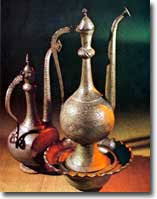 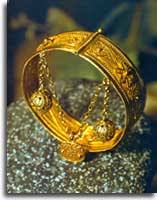